Among donations received by our retail shops was an unopened envelope, addressed to Miss I Stevens in Purakanui.

Based on the style and stamp we wondered if the letter inside may have some value, or tell a story.

Shop on Carroll put out a public request to see if we could find anyone connected. Tom Stevenson had an Aunty named Iris Stevenson who worked at the address on the letter, and he made contact with us.

Tom and his wife Sandra visited the shop in May and we opened the letter together. It was indeed addressed to his Aunty Iris Stevenson.

And the letter contents? It happened to be a grocery order for the shop where she was working. The letter was from 1951, sent by M Jarvis. Watch Tom open the envelope:

Tom suggested the following might be the circumstance around the letter: The M Jarvis (and family by the quantities ordered) would have been putting their order in for the Easter break to save them carrying it with them.  They would have then been able to catch the tram into town, then the train to Mihiwaka Railway Station (no longer exists).

From there, Arthur Henry (and one of his relief drivers Frank Todd or Jack Caldwell) would have picked them and all the other holidaymakers up in his Fargo and Ford buses and taken them to their cribs in Osborne, Long Beach and Purakanui to enjoy the Easter holiday.  At the end of Easter he would then pick them up again as previously arranged and deliver them all back to Mihiwaka Railway Station.

Iris also had her taxi driver's licence in those days and would sometimes be called upon to collect people from or deliver them to the station - only about one family in five had their own private motor vehicle in those
early post war years.

It was fantastic to have the opportunity to open the letter and return it to the family. Tom will keep the letter alongside a number of other photographs and items he is keeping to tell the story of his family history! 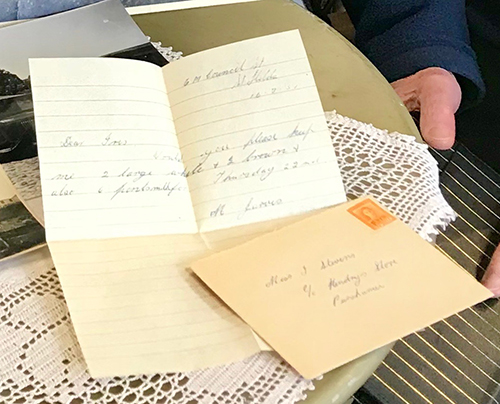