Rona had been waiting for the call – there was now a place for her at Holmdene.

She was thrilled, but her first question for manager Jo Hobson wasn’t about her place at Holmdene, it was about Boy, her handsome companion.

There was no way Rona was going to leave behind her 5-year-old tabby. “He’s so special, he means a lot to me”, said Rona. When Jo called, Rona immediately asked whether she could bring her cat. She was so pleased when the answer was yes, and they have both been made to feel at home at Holmdene. Rona had always had a cat, so it was important to her that Boy came too!

Boy is great company and has settled in very well, mostly staying in Rona’s room, but occasionally venturing into the passage and further afield. They have been at Holmdene since January, and in May were able to move to a courtyard room which Boy loves as it has access to the lovely sunny courtyard garden outside. It is giving them both the freedom to come and go, and Boy is often seen, exploring outside, by staff and residents.

In fact, Holmdene suits them both very well!

Holmdene care home in Balclutha is home to 35 residents.

Articles from our Summer People Magazine 2021 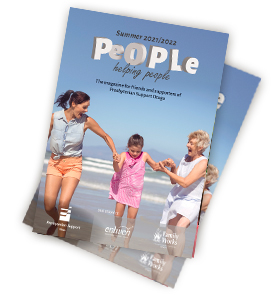