This year we are celebrating the 30th anniversary of our Buddy Programme and we are delighted to bring you Sione’s story. Now the Deputy Head boy at Waitaki Boys High School, Sione is of Tongan and Māori descent, with some Scots and Irish ancestors too, and has a string of academic, sporting and cultural awards to his name. With plans to study medicine when he leaves school, Sione was recently reunited with his adult buddies, Donald and Heather Harvey.

The three first met when Sione was around nine and half years old. Sione’s mum Sonya recalls that “Heather and Donald were like grandparents to Sione. They were there for him at a very difficult time in his life, at a time when his grandma was unwell. He was extremely close to my mum, so going with Donald and Heather on a weekly basis was so good for him - it was time out from what else was going on in his life, and it really helped him emotionally.”

Our Oamaru-based Buddy Coordinator, Christine Moffat arranged the get-together, which took place at Donald and Heather’s home and garden. Christine asked Sione, Donald and Heather about their experience and memories of their three years in the Buddy programme.

Christine: What are some memorable experiences from your time as a Young Buddy, Sione?

Sione: There are a lot! Hanging out with Donald, doing painting and welding. He taught me about safety gear. I remember baking with Heather, using secret recipes, and we also played card games and it was a peaceful, rewarding way to learn new things.

Heather: We had flour up to our elbows when we were baking! We also gardened together, and you helped on the farm.

Sione: The garden is just the same as I remember. There’s the kale - I remember making those kale chips with you Heather!

Christine: As a young adult Sione, and looking back, how did being a Young Buddy help you?

Sione: It really improved my social skills and confidence. Donald and Heather always showed me respect and I learned how to show my respect for them. They showed me what motivation looks like too. I am thankful to them both – they have helped me a lot, and they are a big part of who I am today.

Christine: What was it like being an Adult Buddy for Sione?

Heather: It was easier than we expected. Sione made it that way as he is a cooperative and willing boy. We developed a really enjoyable relationship.

Christine: What would you say to someone considering becoming an adult buddy?

Heather: Don’t hesitate. You are rewarded as much as the child. The satisfaction you gain from seeing the child flourish and grow in confidence is very fulfilling. I have always enjoyed working with children, having been a school teacher.

Donald: The more you give, the more you receive – it really brightened our day. You get a kick out of seeing a kid come back who is doing great. We could tell that you were very close to your Grandma, Sione. You really picked us up by being in our lives too. Seeing you again has really made my day!

Christine said later “when Sione met up with Donald and Heather it was like old friends reuniting - they picked up from where they left off. It was evident in their interactions that a trusted, respectful relationship had developed between them. It was a delight to see them together and really shows what a difference the Buddy programme can make in the life of the Young Buddy and Adult Buddies as well.”

Currently we have 114 matched young buddies, but with many more on our waitlist. If you are interested in finding out more about being an adult buddy please call us on 0508 396 678.

The Buddy Programme is part of our Family Works Skillsbank

The Buddy Programme supports the emotional and social well-being of children by matching them with carefully selected and trained adult volunteers in a mentoring relationship. A child is usually matched with one adult, but sometimes with a couple, as Sione was.

The programme was first run by The Volunteer Centre in Dunedin in 1985 before being taken over by PSO in 1992. Over the years the service has expanded and we now have eight Buddy Coordinators working across Otago, who have matched and supported over 200 Young Buddies and their Adult Buddies during 2021.

Our award winning Buddy Programme is largely funded through donations. If you would like to support this programme, please donate here.

Articles from our Winter People Magazine 2022 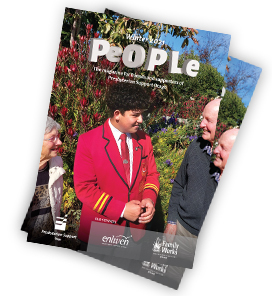